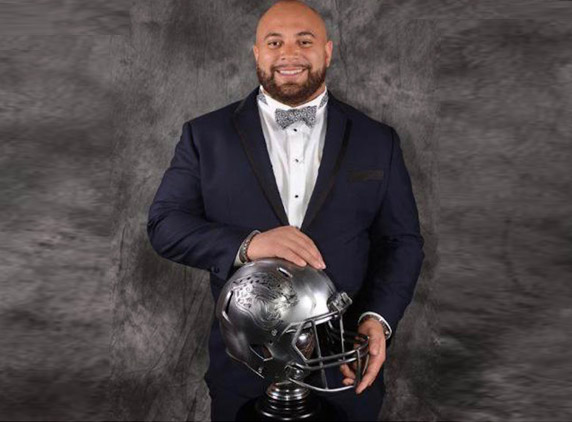 Roy Miller was selected by his Jacksonville Jaguar teammates as the 2014 Ed Block Courage Award winner. The award is presented each year to one member of every NFL team, recognizing the player’s courage and dedication in returning from injury or illness. Miller’s qualification for this award began in the 2013 season when he suffered a shoulder injury and still kept playing instead of opting for a surgery.

Miller suffered a shoulder injury during the 2013 season and played with the injury instead of opting for surgery.  He waited until the conclusion of the season to get the shoulder surgically repaired.  Miller spent the entire offseason recovering in Jacksonville and returned completely fit for the 2014 season.  He played in all 11 games, totaled 22 solo tackles and four tackles for loss.
“Roy stands for everything this award is about,” Jaguars defensive tackle, Sen’ Derrick Marks said.  “He battled through an injury the entire season, never complained, but played every Sunday for us.  He is the epitome of a true teammate.  It was a real credit to him and his dedication to his teammates.”
Miller was honored along with the 31 other team nominees in March 2015 at the 36th annual Ed Block Courage Awards gala in Baltimore.

Miller was also nominated as the Jaguars 2014 Salute to Service Nominee.  Teams nominated players, coaches, personnel, and alumni for their demonstration of exemplary commitment to honoring as well as supporting the military community. Finalists for the award were announced in January 2015 and the winner was recognized at the “4th Annual NFL Honors” awards show in Arizona on Saturday, January 31, the night before Super Bowl XLIX. With this award, Roy Miller joined the ranks of notable players such as: 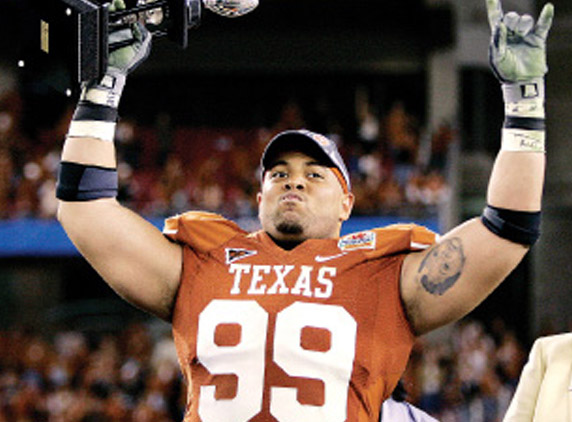 Roy Miller was chosen as the defensive player of the game in the matchup of the 2009 Tostitos Fiesta Bowl game was a post-season college football bowl game between the Ohio State Buckeyes and the Texas Longhorns on Monday, January 5, 2009, at University of Phoenix Stadium in Glendale, Arizona. Texas participated in the Fiesta Bowl because the Big 12 champion University of Oklahoma Sooners were participating in the 2009 BCS National Championship Game; however the bowl kept its ties to the Big 12 by selecting the Longhorns, who did not play in the championship game as they beat Oklahoma in the Red River Rivalry, 45-35, then lost to Texas Tech and Texas Tech in turn lost to Oklahoma and dictated that a tiebreaker would decide that the highest BCS ranked team for the Big 12 South the week of November 28, 2008 would be in the title game.

Which was one of the most devastating losses in the history of Texas football. The controversy surrounding this game stemmed from the rivals of Oklahoma going to the national championship even though the Texas Longhorns defeated them in the regular season.

The Buckeyes were chosen as an at-large school as co-champions of the Big Ten Conference, having lost the right to play in the Rose Bowl due to a 13-6 loss to Penn State on October 25. Roy Miller was named defensive MVP (Most Valued Player) of the Fiesta Bowl in the Longhorns 24-21 victory over Ohio State. He had three tackles, two pressures and a sack in the University of Texas’ 24-21 victory over No. 10 Ohio State in the Fiesta Bowl to earn Defensive MVP honors. Miller and company and the rest of team limited Ohio State (10-3) to 379 yards of total offense with 203 rushing.  His performance was pivotal in the Longhorns’ 24-21 come-from-behind victory over Ohio State. 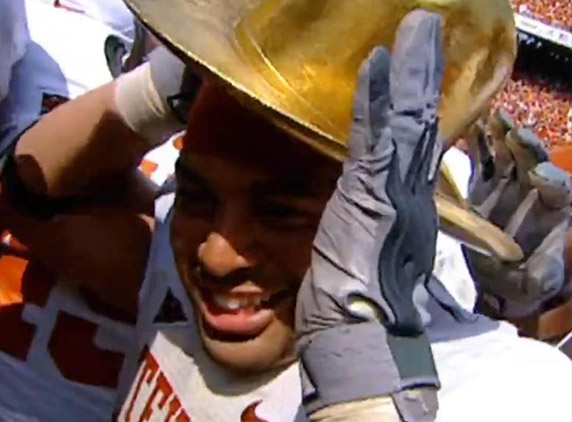 The game was a back-and-forth contest; Texas’s victory was not secured until the game’s final nineteen seconds. Vince Young, the Texas quarterback, and Michael Huff, a Texas safety, were named the offensive and defensive Rose Bowl Players Of The Game.[3] ESPN named Young’s fourth-down, game-winning touchdown run the fifth-highest rated play in college football history.[4] The game is the highest-rated BCS game in TV history with 21.7% of households watching it and is often considered the greatest college football national championship game of all time.

Texas’s Rose Bowl win was the 800th victory in school history[9] and the Longhorns ended the season ranked third in Division I history in both wins and winning percentage It was only the third time that the two top-ranked teams had faced each other in Rose Bowl history, with the 1963 Rose Bowl and 1969 Rose Bowl games being the others.

Roy Miller was a member of this team. The game was played at the Rose Bowl against USC and his performance was considered to be the best by many. Special moments from that game can be viewed in the following clip.

Roy Miller was nominated by the Jacksonville Jaguars or the fifth annually Salute to Service Award presented by USAA. The award, presented annual by USAA and the NFL, honors a league member who demonstrates an exemplary commitment to honoring and supporting the military community. USAA is the official military appreciation sponsor of the NFL. Miller was nominated by the Jaguars because of his commitment to helping children of the military succeed.

NEW YORK — The NFL has created a sportsmanship award to be voted on by league players.

Commissioner Roger Goodell announced the award Tuesday, with each team nominating one of its players during the season. A panel of former players will select eight finalists from the 32 nominees.

Hall of Fame running back Curtis Martin will be on the panel, along with Warrick Dunn, Karl Mecklenburg and Leonard Wheeler.

The eight finalists will be listed on the Pro Bowl ballot under the NFL Sportsmanship Award when the players vote on Dec. 19. From the eight finalists, each team’s players will submit a consensus vote of its choice for the winner. As in Pro Bowl voting, a team cannot vote for its own player.

“While we enjoy the incredible performance of NFL players on the field, we must never forget a core value of football that transcends all levels of play and exemplifies the complete athlete: sportsmanship,” said Troy Vincent, the league’s executive vice president of football operations. “This award will recognize those who never hesitate to show that excellence in football is not achieved without respect for the game, for their opponents, for the officials and for the fans.”

A $25,000 donation NFL Foundation to a charity of his choice will be presented to the winner.